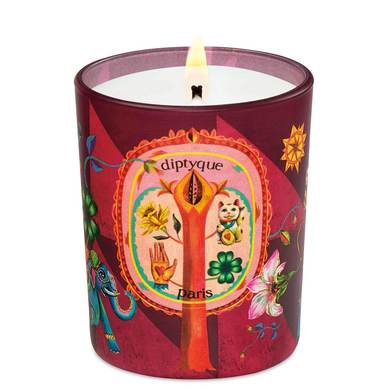 Skip to the beginning of the images gallery
About This Product
Description
diptyque invites you to discover a universe of lucky charms where protection, luck and harmony are our wishes for the new year. The scent and colors of the three candles of the collection are rich in virtues, rites and meanings. The olfactory notes of the Flora Fortuna candle are related to three different ways of attracting luck. By crushing rose petals, the ancient diviners predicted luck, love or success; in the Middle East, the smoke of clove purified the home; and in the South of France, anise seeds were thrown on married couples to wish them prosperity. The symbolic figures of the Flora Fortuna candle come from cultures here and elsewhere. In Asian myths, the elephant brings success in everything that one undertakes. Every morning the elephant greets the sun with his trunk, and every evening the moon, so that these stars are favorable to humans. The maneki-neko cat, who waves his paw, the four-leaf clover and the golden daffodil, promote wealth. The color red attract the necessary energies and reinforces dynamism and the vital force.
About the Brand
The diptyque story began in Paris at 34 boulevard Saint-Germain with, at its heart, three friends driven by the same creative passion. Christiane Gautrot was an interior designer, Desmond Knox-Leet, a painter, and Yves Coueslant, a theater director and set designer. The first two collaborated designing fabrics and wallpaper for Liberty and Sanderson. They were joined by the third in 1961 and opened a shop to display their designs. Yves became the administrator and consultant; Desmond and Christiane were the artistic soul. Bit by bit, with finely honed taste, the trio transformed the site into a one-of-a-kind setting, a kind of stylish bazaar where one found surprising articles unmatched in Paris, mined and conveyed home by the trio over the course of their travels.
Reviews
no reviews yetBe the first to write the review.
Only registered users can write reviews. Please Sign in or Create an account