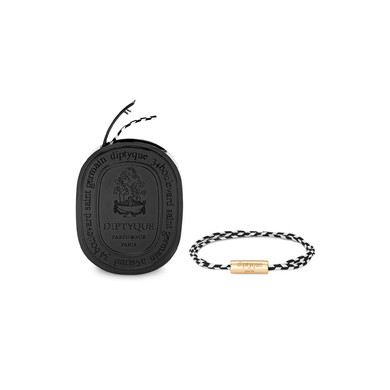 Skip to the beginning of the images gallery
About This Product
Description
This perfume-infused bracelet diffuses the intense floral notes and fruity accents of Eau Rose. Fitted with a detachable clasp, it is easy to tie and untie. Worn whenever the mood takes you, it can be lengthened or shortened as you wish.
How to use?

For a more intense diffusion of the fragrance, wearers are recommended to wrap the bracelet twice around the wrist. To conserve its olfactory qualities, do not place the bracelet under water and renew it each week without changing the clasp. WARNING: Not suitable for children under the age of three. Not recommended for people with sensitive skin. Discontinue use immediately if your skin becomes irritated. If irritation persists, seek medical attention immediately. Available with the following fragrances: Do Son, Eau Rose.