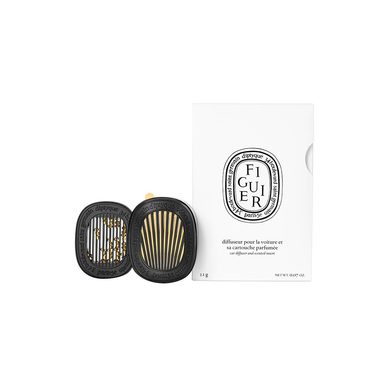 Skip to the beginning of the images gallery
About This Product
Description
Elegant and sophisticated, the diptyque car diffuser uses an innovative system of cold diffusion. The diffuser's adjustable metal grill allows you to control the intensity of fragrance in the car. Each insert lasts for up to three months after opening, as long as the container is properly closed after each use. When used continuously, each insert will last for 40 hours, with up to 80 cycles of scent diffusion (1 cycle is equivalent to an hour, alternating between 10 minutes of scent diffusion and 10 minutes' pause).
How to use?
Simply attach to your car's ventilation grill to diffuse the woody fragrance of Figuier, where green leaves, earthy bark, and milky sap mingle with a hint of the fruit.
About the Brand